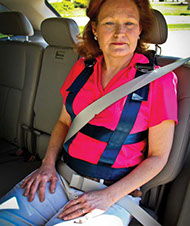 The Moore Support Car Seat Vest installs in personal vehicles, to be used with
a lap belt or lap/shoulder belt system.

This product was created for persons challenged with various conditions including autism, stroke, and cerebral palsy, for this reason, It is our hope that our car seat vest makes traveling easier and enables them to sit taller and enjoy the beautiful world around them as they travel. Moore Support is available in three sizes. See specifications below.

William Moore founded BESI, Inc. in 1975.  Known as the premier school bus upholstery manufacturer in the United States, we began

producing School Bus Securements for children in the early 1990’s.

In 2008 William was diagnosed with Glioblastoma, a rapidly growing brain tumor. This tumor caused paralysis making it difficult to sit upright without some support while riding in a vehicle.  Despite his valiant fight against this malicious disease, William lost his battle on May 29, 2010.  To those that knew him, he will always be remembered as a sharp-minded gentleman with a gentle heart and a kind soul that loved life and believed everyone should be treated with dignity.

To order or inquire please call us directly at 1-800-543-8222; message us through Facebook or contact our National Sales Manager, Aaron Harris via email: aaron.harris@besi-inc.com